WhatsApp has started to roll out an update for its Android beta app that brings a new feature called Private Reply. The new functionality that allows users to privately send messages to a participant in a group without letting others in the same group know is only available for WhatsApp for Android beta testers as of now. This feature has arrived for Android users with beta version 2.18.355. Notably, the update appears to come with a few bugs as well. The latest version of the app reportedly crashes while deleting media files from a group.

Last year in December, WhatsApp had mistakenly rolled out the ‘Reply Privately’ feature in a beta update for Windows Phone. The Private Reply feature was found to have appeared and was subsequently dropped from the beta version of WhatsApp. Though, it was speculated that the feature could roll out soon. Almost a year later, the messaging app is finally getting the feature, called as Private Reply. Now, when you are in a group chat and have to privately reply to a particular message that only the sender of the message can see and not everyone in the group, this feature will come in handy. 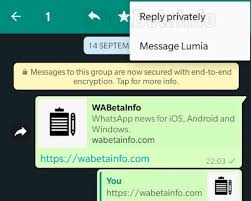 To use the WhatsApp Private Reply feature, hold the message of the sender to which you have to reply privately. Further tap on the three-dotted menu on the top right corner of the app. Here, you will get the Private Reply option. Once you choose the option, the selected message will open privately in the chat window of the sender in the form of a reply thread. This feature was first spotted by WABetaInfo………..Read More>>